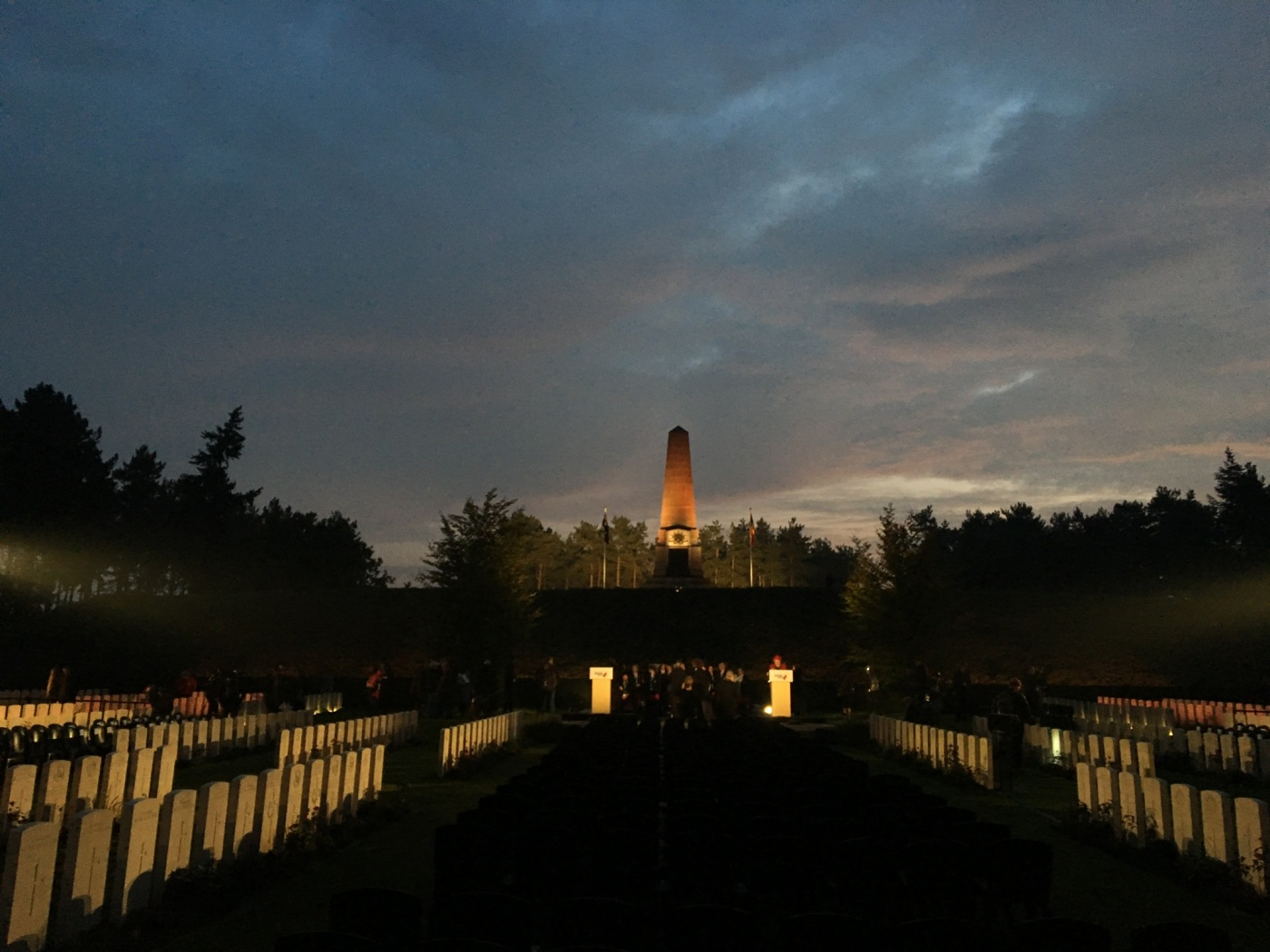 Performing in the Last Post Ceremony at Menin Gate just a few hours earlier, it was a bit tricky to get a rest in – some of us managed, but most were too excited for the day ahead.

Having heard so much about the Remembrance Trail on site, set up by the Department of Veterans’ Affairs, our tour manager / mum, Rochelle, arranged for the choristers and APs to be dropped off at the beginning of the trail to experience what the attendees would witness. It would also set the tone for the morning of reflection and remembrance.

The trail through Polygon Wood was lined with information plaques and as we got further, we were an audience to various activations, most we weren’t expecting. There were actors in replica trenches or huts taking on the roles of army cooks, officers or soldiers. It was so incredibly surreal yet authentic to witness all this in the misty darkness.

In the distance there were gunfire and explosive sound effects, while the informative plaques took us on a journey explaining the events that took place which claimed more than 5,000 Australian lives, as well as those from New Zealand and other countries in September 1917.

One path led us off the trail to Scott Post, a German bunker captured by Australians. It was named in honour of Distinguished Service Order awardee Lieutenant Colonel Allan Humphrey Scott, Commander of the 56th Australian Infantry Battalion, killed on 1 October 1917.

Visual presentations showed soldier life in WW1 and what this now beautiful site had looked like 100 years ago, when it was completely destroyed by warfare.

The final checkpoint before Buttes New British Cemetery was a field of handmade poppies. The poppies were from 5000 Poppies, an organisation who stage activations across the world planting poppies that people send in with images of soldiers who have served. Lynn Berry from 5000 Poppies informed us that she had provided 3000 poppies to the Rotary Club of Armentieres to be planted at commemorative events such as this.

The effect was beautiful! Voices of Birralee’s Birralee Blokes’ rendition of In Flanders Fields was played. (On a side-note, James, one of our choristers, was one of the Birralee Blokes who recorded for this track in 2004).

At the end of the trail, our choristers had a quick look around the site in the dark and eeriness of the morning before heading to our greenroom / tent for breakfast, before warm ups.

Our first set was a part of the pop-up entertainment to engage the audiences as they arrived. In this set we performed four songs – a great chance to break the ice and overcome any nerves before the filmed pre-dawn and Dawn Service began.

We then headed back to our tent for the final break and to add layers to withstand the cold especially as dawn approached.

On the main stage, we performed pre-service entertainment with the band and some by ourselves.

By then most of the crowd had arrived, along with the VIP parties, including Australia’s Governor General, the Honourable Sir Peter Cosgrove AK MC (Retd) and Her Royal Highness Princess Astrid, Princess of Belgium.

We were sat together on the stage with the New Zealand Memorial behind us, thousands of graves in front of us and as we glanced up we could see the iconic rising sun on the Fifth Australian Division Memorial at the top of the buttes.

When the official Dawn Service began, it started to get cooler. All was put into perspective, however, when remembering the horror that took place on this site 100 years ago. All we had to do was sing the beautiful pieces we had rehearsed and stay awake for an hour or so – a very small task in comparison.

The service was very moving with speeches delivered by Sir Cosgrove, Princess Astrid and more, and we sang O Valiant Hearts, the Australian National Anthem and music to accompany the wreath laying.

We lay a wreath on behalf of Birralee and on behalf of Geraldine and Bernie Knapp for their relative Patrick Bugden VC.

We also lay a wreath for the family of Private James Alexander McAllister who was killed on 26 September 1917 and has no known grave.

When the Dawn Service ended, we sang our post-service set with the band. Just as we finished the last note of our final song, My Country, the Governor General appeared on stage and told us that Princess Astrid would like to meet us.

Exercising perfect protocol, our two singers in the front row, Jules and Olivia, greeted the two dignitaries, while it was joked that Jules was about to pass out from excitement.

The press by this point had swarmed forward around the stage to take pics of this exchange. It was pretty exciting. We then sang an encore of Waltzing Matilda with the band, as requested by Sir Cosgrove.

Remaining on stage we took photos of our group, while various attendees requested photos with us.

Here we met Michael Whitty – he is cycling through all the battlefields in Europe and Turkey during the centenary period, with his ancestor’s diary in his pocket who served in WW1. One of our choristers’ Amirah remembered that her mum chatted with Michael in July last year when one of our choir’s performed at the Anniversary of the Battle of Fromelles. We look forward to catching up with him next year in either Le Hamel or Villers-Bretonneux in France.

After the service we headed back to our tent with the APs to regroup after an emotional morning as the sun began to rise, adding a glow to the 5th Australian Division Memorial.

We sleepily headed back to our hotel in Kortrijk for a few hours’ rest before the tour would officially end that night with a group dinner, and of course a final song by the group before parting ways.

It’s been an awesome tour for all involved, but not possible without the input of a number of people. Thank you to:

If you missed it, you can catch up on the pre-dawn and Dawn Service via this link.

Thanks so much for reading and for following us on this incredible journey!

We look forward to sharing more blogs from our overseas trips in the future as part of this very special commitment.

2 thoughts on “Day 7: Polygon Wood – We will remember them”