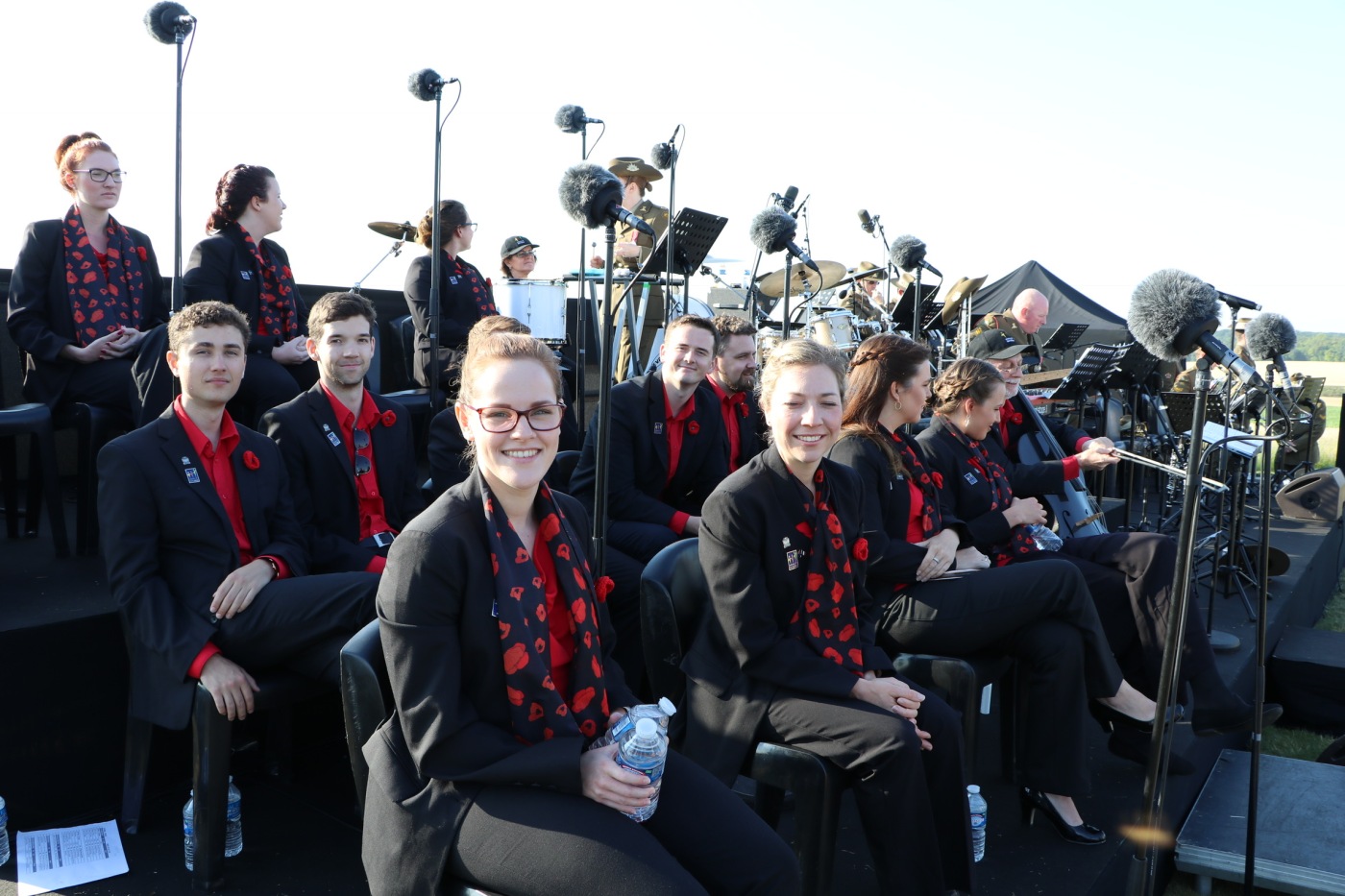 The choristers’ last day on Wednesday began with an early start as the group were on the road to The Australian Corps Memorial, Le Hamel, France, for the Centenary of the Battle of Hamel commemorative service.

After a week of discovering this region’s relevance to WW1 and learning of the battles, particularly, the Battle of Hamel on 4 July 1918, our choristers were ready to pay tribute to this time in our history through song.

“With the monument of the Sir John Monash centre at the Australian National Memorial in the distance, and the trenches of Le Hamel before us, we sang wholeheartedly in the pre-service alongside the Australian Army Band directed by Lieutenant Colonel Craig Johnson. It has been such a pleasure to sing with them and their soloist Tanya Christensen,” chorister Bridget said.

The service began with a video of details of fallen Australian soldiers, some as young as 20-years-old. There were 93 flags from Australia, France, USA, the United Kingdom of Great Britain and Canada placed in the trenches, honouring the allied nations involved in the 93-minute Battle of Hamel.

Speeches noted how the battle was meticulously planned by General John Monash to be 90 minutes, and it took just three minutes longer. It was a battle of ‘firsts’, with the Australian Corps fighting alongside the American forces for the first time in history, and was an ‘all arms’ battle with the use of  planes, tanks, bullets, with wireless sets and carrier pigeons for communication.

While it was labelled a ‘text book’ victory, the loss was still costly with Australia alone enduring 1,062 casualties, with 800 soldiers killed. 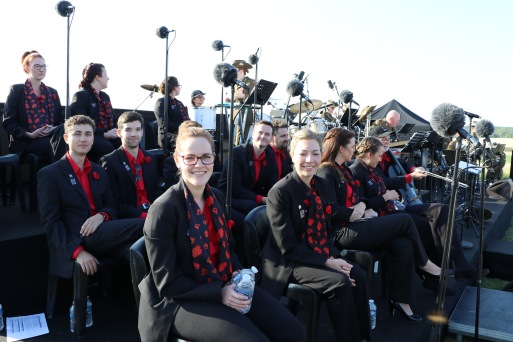 Choristers in the screen at the service

The choristers in the screen at the service (pic by Rhonda)

“As the names of the fallen were read out, the flags blew in the wind, as if other soldiers were saluting them. Presenters reflected on the bravery of our soldiers, and were reminded that life is full of choices. We can choose to forget about our soldiers, with their efforts fading into the dust of history. Or we can choose to remember with pride, respect and reverence. We can choose to keep today’s soldiers in our thoughts and hearts as they protect us through dangerous and trying times,” Bridget said.

Distinguished guests and other members of the audience were moved by Voices of Birralee’s performance, with an email coming from a lady from Australia even before they had finished singing, full of admiration for the choir’s rendition of Amazing Grace.

The choir knew that many of their families were watching the ABC live footage at home with messages of encouragement and pride being sent.

“The importance of our choir’s performance and attendance at this event cannot be understated. We are the voice of a new generation, one who has never known war like our ancestors. We are the voice for those who were permanently silenced. A voice for the ‘quiet ghosts’ on the Western Front’,” Bridget said.

The choir after their performance (pic by Michael)

Finding some shade after the performance (pic by Michael)

Sally and Julie (pic by Michael)

Alex and Bree (pic by Michael)

The past week has been an incredible tour for our choristers, conductors and accompanists. Last night they celebrated their time together with a group dinner in Amiens.

“Congratulations to every singer, for the integral part which you played in the ensemble. I couldn’t have asked for a more talented, positive, resilient and cooperative team of young people and it has been a privilege to work with you all. Thank you also to LtCol Craig Johnson from the Australian Army Band and the musicians, including soloist Tanya Christensen. Special thanks to Brendan Murtagh, Jenni Flemming and Gwyn Roberts. And finally a huge shout out to Michael Murtagh for multitasking as MC, French -English translator, logistics assistant, photographer and super grandad!”

The boys of the tour, Alex, Oli, Ryan, Chris and Brendan (pic by Julie) 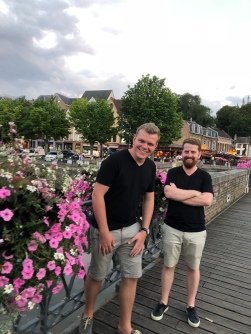 Chris and Brendan (pic by Julie) 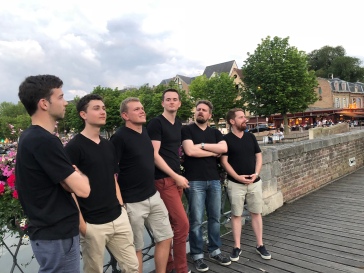 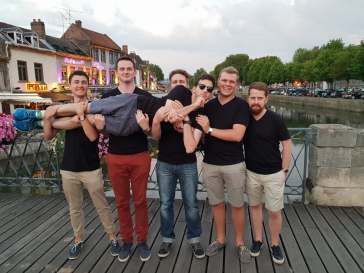 The men of the choir (pic by Maddie)

Chorister Bridget added: “This has been such a fantastic tour. A highlight has been getting to know the Birralee community- singers, Julie, and families of the singers sharing their talents with us. We are more a community than just a choir and it’s amazing that everyone has something special to contribute. Thank you all for a once-in-a-lifetime experience!”

Chorister Alexander Brown noted: “Highlights of the trip include performing beneath the Arc d’Triomphe – certainly a once-in-a-lifetime experience – as well as the warm reception we received wherever we travelled. The people of Bailleul and Halloy-Les-Pernois were incredibly generous with their food, drink and applause, and it is visiting small communities such as those that makes trips like these so rewarding. Huge thanks to Jenni and Gwyn – world class musicians providing world class accompaniment – and Michael for being on multiple occasions our only form of communication with the local communities. Appreciation to Ryan and Oli for being top shelf roomates. And of course Julie, who was not only conductor, artistic director, tour director and logistics manager, but also a friend to the whole group. And finally, a big shout out to Rochelle, Amirah and Maree for their tireless admin work – this tour was as much yours as it was ours.”

There’s a number of people who make these centenary tours possible. Special thank you to:

Finally, thank you to all the friends and family back home for supporting and following our choristers’ journey.

We look forward to our next tour – the Centenary of the First World War Armistice as we send 30 choristers to France for 11 November at the Australian National Memorial, Villers-Bretonneux.

For now, we wish our July tourers a safe and happy rest of their trip.

One thought on “Day 7: Singing for the soldiers of Hamel”